Menu
Log in
Register
Install the app
You are using an out of date browser. It may not display this or other websites correctly.
You should upgrade or use an alternative browser.

The program doesn't always give the number of holes as you input, in my experience. Often it's one or 2 off. So I doubt that's your issue for printing incorrect scale.
I wouldn't waste your time trying to make an incorrect printout fit - it's either right or it isn't.

When others have had problems, usually the reason is either that they have tried to use the very first page of the print output, which isn't the right size, just a visual of how it will look. OR as Jim says, their printer settings are ticked to 'shrink to fit page' or 'resize' or some such thing.

Its not the first page, it was 3 separate pages, but think you's have gave me what I done wrong. Being really new to printing craic, there was a line sitting above the bottom of the page so I dragged it down to fit the whole page in, cause it looked like it should to me!

Will go back to the cafe tomorrow & touch nothing but print

@Mole so do i use the draft on the first page to line the cutouts up right? Meaning the same no. of holes each side of the halfway line as it shows in the first page.
Last edited: Feb 21, 2018

The multi page printout duplicates adjoining edges, so I just match the writing and holes up.

Think I may aswell quit

the 900 is still to small & the 650 must be that bit small aswell as it sits on a rocker. Every time I go for a print out its half hour walk each way

Is it a Toaks 650? I've made them ok.
Message me your measurements, and stove height/gap, for both pans, with an email address, and I can send you a pdfs to print. (I'll check they fit first!)

@Mole Cheers for that I understand my very stupid mistake in the split cone now i think, unless its more than i think

, the full size for the 900 still has me stumped though . Will try making split script for it later to see if I understand my mistake or not. Thanks again!

Not to bad, don't know how to join them fins below the handle on the top half, or if I really need them?

Did do a small tear on the bottom tab though

Cool.
Dunno about the fins. Maybe don't need them. But before you cut em off, just try putting the top on with the castellations slotted alternative way around fins inside first not out, might work out stronger.

I'll sort out the 900 template again later or tomorrow.

edit: that is a much nicer closer though!

Just made another template for a split cone for a toaks 900 & its again too small. even the cone height came out 5mm shorter than it shoulda.
Really haven't a clue what am doing wrong, I just enter the numbers, go through the steps & in printing all i do (now

)is select page & hit print.
ISO paper is selected & no to large paper.
edit: It must be the printing, I thought i had it at the right size but its not, so... good job I don't have a brain cell, the poor thing would only get lonely
Last edited: Feb 24, 2018

My paper test-cone fits perfectly, but I'm still kind of scared to mess up my expensive titanium foil... I'm mostly anxious about the closure because on my paper cone it keeps bending open. I know Ti is more rigid but what's the best closure to keep the conic shape intact?
Have any of you ever done a Ti split cone? If so, how did you make the closure? Pictures would be greatly appreciated!

I've made plenty one piece Ti cones - I always use "tab" closure (same as Captain Paranoia I believe) - I've never made a 2 part cone
…….which is no help what so ever .

I did one or two paper iterations each day over the last week and finally settled on which closure I'll use. Hopefully I'll have time to make my Ti version this weekend!

Done! So happy I tried about ten paper cones before committing to a design and cutting up my Ti foil.
The bottom half closure consists of a double fold on both sides which slide into each other like the TD dovetail halves slide into each other. The top half closure has a lip wrapped vertically around itself on one side, and a horizontal lip on the other side which slides into the slot created by the first lip (see pictures, they'll make it much clearer).
I clamped the foil between two pieces of plywood and used a router with a pointy bit to create the holes. The holes still need some de-burring with a Dremel but they did come out fine I think.
Did a first stovetop boil test with 17g in my Toaks Ti Siphon burner and got 500ml of tap water to a boil, then snuffed the flame and weighed 5g of remaining ethanol which means I used only 12g or 15.2ml.
Disclaimer: these are give or take numbers weighed on a kitchen scale with 1g precision.

Edit: typo's... I'm not my brightest self on a saturday evening after 11. 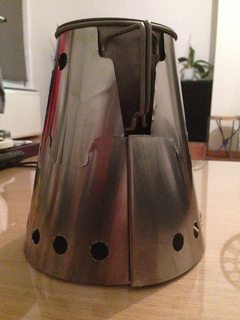 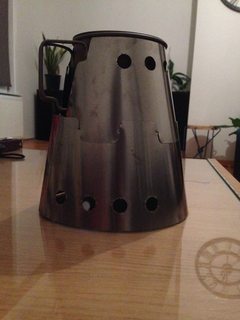 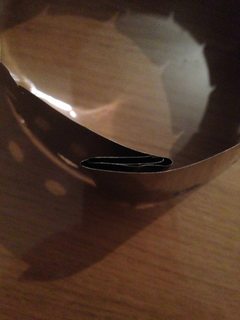 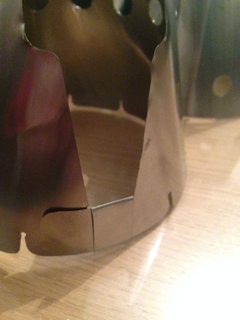 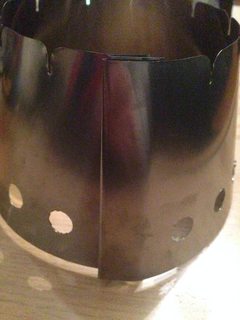 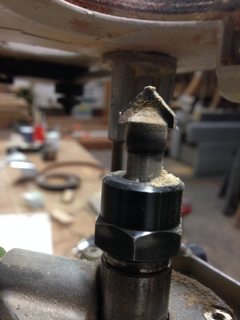 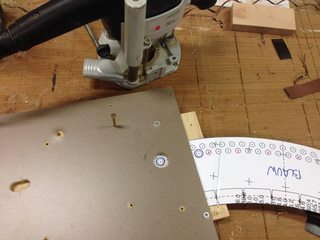 Trying to make a one piece for my toaks 900 too and same problem, idi you ever work out what the problem was?

Enzo said:
Trying to make a one piece for my toaks 900 too and same problem, idi you ever work out what the problem was?
Click to expand...

Are you following instructions exactly from the OP? Deviating ( accidentally or otherwise) is usually the problem

Staff member
I think @Padstowe was having issues with printing at the right scale but sussed it out?

Yup printing at the right scale. I have no idea with IT stuff, but my more capable wife couldn't see what I've done wrong. Same scale of error as padstowe seemed to have so maybe the same issue?

I was, wasn't clicking on the print to actual size so was always coming up small.

One question for cutting holes in ti. I've been looking at this hole punch I can't seem to find a 8mm punch, is there any or just compensate with more holes?

Will have to look for that, can't see anything saying print to actual size so far...

Enzo said:
Will have to look for that, can't see anything saying print to actual size so far...
Click to expand...

It might be more a matter of unticking a box saying something like " fit to page". Depends on the printer software

Padstowe said:
I was, wasn't clicking on the print to actual size so was always coming up small.

One question for cutting holes in ti. I've been looking at this hole punch I can't seem to find a 8mm punch, is there any or just compensate with more holes?
Click to expand...

I often use a 6mm paper punch. Just go double row or closer together. It's not that critical

This sort of thing works with a hammer and a bit of effort.

I use one of these https://www.amazon.co.uk/Capri-Tools-21050-Metal-Puncher/dp/B00OM4GVX0 - and even that struggles (? getting blunt ?) with Ti foil.
I tried paper punch - cut one hole and then 'gave up'.
I tried several of the punch type things Williams suggseted and all I got was a nice round dint in the foil and that was using various sufaces to support the foil.
A apir of nail sissors is good to expand holes already made or join 2 holes up.
Sanding the edges is good move as Ti foil can be very sharp.